With the growing demand of large-capacity quantum communication, distributed and multi-parameter, fault-tolerant quantum computing, multimode and large-scale continuous variable (CV) quantum states have become a hot research topic. To date, preparing multimode entanglement with individual degrees of freedom (DoFs), such as spatial mode, frequency or wavelength, and time bin, has gradually matured. With the boost of multimode entanglement, multiplex CV quantum communication has been realized and demonstrates the prospect of reinforcing the channel capacity. To further extend the number of entanglements, it is necessary to prepare multiple DoFs simultaneously to construct a CV high-dimensional entangled light field.

To address the problems, a joint research group led by Prof. Jiangrui Gao from the State Key Laboratory of Quantum Optics and Quantum Optics Devices at the Shanxi University has demonstrated and experimentally verified the first-ever CV high-dimensional entanglement with three degrees of freedom directly generated with a single OPO cavity.

As shown in fig.1, photon pairs produced via a type-II parametric down-conversion process have many accessible DoFs, the correlated photons (A, B) have symmetrical "energy levels", antipodal topologies charge and orthogonal polarization. In the experiment, the measurement of quantum correlation is extracted in balanced homodyne detection with a pair of local fields that can be independently selected. 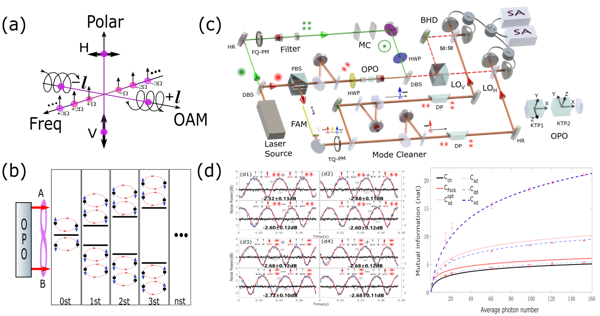 "Different from the traditional CV entanglement generation scheme, the entangled light source generated by the multi-degree-of-freedom and multimode OPO has higher scalability and richer light field structure. It not only meets the requirement of high-capacity quantum communication, but may also realize special quantum tasks, such as quantum multiparameter measurement, quantum interfaces between DoFs, and especially hybrid high-dimension quantum teleportation", said by Prof. Kui Liu, "Whereas, there are many open questions remaining to be explored and exploited, such as whether it has quantum characteristics analogy to discrete variable high-dimensional entanglement, better security, and enhanced noise immunity".