Photon sieves composed of etched holes on an opaque film have been proposed firstly, to the best of our knowledge, to reduce the focal spot size and alleviate high diffraction orders in soft X-ray and the optical spectrum. With the rapid development of nano-fabrication technology, photon sieves have been demonstrated at nanoscale and worked as binary-amplitude metasurfaces for optical focusing. The photon nanosieves have the advantages of polarization independence and more degrees of freedom in design than the concentric rings in zone plates, which therefore enable more complex manipulation of light, such as hologram, by arranging the locations of holes in a customized way. Due to the subwavelength feature of nanosieves, their related holograms usually support broadband operation. In addition, the non-resonating mechanism of amplitude modulation makes the nanosieve hologram have a wider spectrum than other metasurface devices with resonating nano-structures. The nanosieve hologram also enables a large field of view for holographic display when combined with tunable phase realized by a spatial light modulator. Beyond the circular shape, rectangle nanosieves have also been proposed to control the geometric phase of a circularly polarized light by rotating the orientations of the rectangular nanosieves, thus enabling full-color holography and the generation of optical vortices in various electromagnetic spectra such as X-ray and vacuum ultraviolet wavelengths.

Nanosieves operate in a transmission mode, where optical transmission of light through the nanosieves is low because of the weak coupling between the propagating light and the waveguide modes supported within the nanoholes. Persistent efforts have been made to solve this efficiency issue. For example, a 15-layer MoS2 film with a thickness of 10 nm can enhance the coupling for higher transmission, meanwhile blocking the undesired background with strong exciton absorption. The resulting hologram has a record-high efficiency of ∼22%, where the contribution from the background light is also involved. Dielectric nanobricks located at only specially chosen positions, as an extension of classic photon nanosieves, are used to sieve the circularly polarized light with an additional geometric phase for realizing a wavelength- and polarization-sensitive hologram. Although their demonstrated efficiency for one single channel is only 2% at the wavelength of 670 nm due to small bandgap of the employed silicon, it indeed generalizes the concept of photon sieves, hereby suggesting new approaches for improving the efficiency of photon nanosieves.

These aluminum meta-mirrors are located on a transparent quartz substrate, working as an analogue of transmissive photon nanosieves, as shown in Fig. 1(a). Compared with other metals such as silver and gold, aluminum is employed here due to the lower cost and less absorption of visible and ultraviolet light. For these aluminum meta-mirrors, their periods along the x and y directions are chosen to be 250 nm, which is almost below half of the entire visible wavelength. In addition, the heights of these aluminum meta-mirrors are optimized to be 100 nm, which is a good balance between optical efficiency and fabrication issues. Fig. 1(b) sketches the experimental setup for hologram characterization. Fig. 1(c) shows the measured intensity profiles at the exemplified wavelengths from 450 nm to 650 nm. 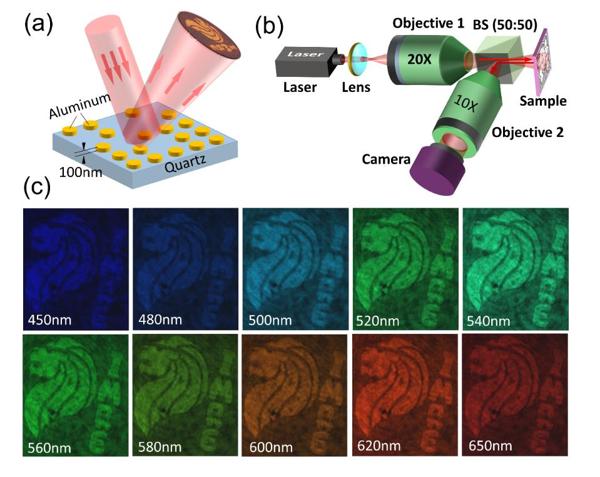 These holographic images cover blue, green, yellow, and red colors, which makes this technique suitable for optical static display. The hologram showed a broadband operation over 200 nm covering the visible range due to the subwavelength features of the meta-mirrors, with performance matching well with the simulation. Meanwhile, the imaging plane shifts at the different wavelength with a dispersion relationship of zλ = z0λ0, where z is the distance between the imaging plane at the wavelength λ and the meta-mirror hologram. Due to the Fresnel imaging location of the demonstrated hologram, these reconstructed images have the same size, which is similar to the case of classic photon nanosieves. In addition, no aberration or distortion is observed at the recorded images, implying good quality of the holographic reconstruction. More importantly, they demonstration is focused on the metamirror hologram that has an experimental efficiency of ∼7% over a broad visible spectrum, exhibiting an enhancement factor of ∼3.5 compared with the previous transmissive nanosieves.

Although the achieved efficiency in the reflective photon nanosieve is still lower than those of dielectric metasurfaces, it provides potential technology for optical display and anti-counterfeiting if the lower-cost nano-printing technique is employed for mass production.